Monday, March 21:  We wake up at 5 a.m. to get ready for our 8:10 flight to Mumbai.  Sadly, we will have only this one day in Mumbai and we really wish we had foregone this whole escapade to Aurangabad.  Live and learn.  I always make some mistakes when I travel.  I guess that means I’m sticking my neck out and taking risks.  If one never makes mistakes, I believe it means one isn’t taking enough risks.

lunch and beers at Cafe Mondegar in Mumbai

There are things I would do differently next time around.  I would not travel to so many places on one trip.  I would spend at least 3 days in each destination. I would try to linger in town and chat with the locals. I would just BE present in each time and place and savor the ambiance.

toasting to our travels in india ~ our last day!

I usually have been good about this, since a trip I took in 1999 to England.  In England, we traveled for only 10 days and in that time we went to Bath, Glastonbury, the Cotswolds, the Lake District, and then to London.  It was too much in too short of a time!  Since then, I decided that I only like to focus on one country and usually no more than 3 cities in one country.  I managed to do this later when we went to France.  I went twice, each time for 2 weeks.  The first time, we spent 5 days in Paris, 4 days in the south of France and 4 days in the southwest at Cordes sur Ciel.  That was perfect.  The second time, we took our sons and spent another 5 days in Paris, 3 days in Normandy, 3 in Alsace, and then 3 near Heidelberg and Trier, Germany.  Later, when I went to Turkey, I spent 6 days in Istanbul, 3 in Cappadocia, and 3 on the coast near Kusadasi.  I have found this is the perfect way to travel because I have time to soak up the ambiance of a place.  There is time to linger, to meet locals, to simply absorb.

In retrospect, our trip to India has been overambitious.  We are both exhausted and by this time, we are more than ready to leave this place.  I think back to the British couple I met when traveling in Hanoi, Vietnam.  I asked them what was their favorite part about India.  They said, “The flight out.”  I thought they were just being negative and I brushed them off.  Now, after these three weeks in India, I know exactly how they felt.  Part of it is just the hardship of travel in India, the filth, the poverty that is so pervasive.  But the other part is our own fault.  We tried to do too much.  It’s simply that. I think had we lingered more and traveled less, we would have had a better and more rewarding experience.

After our flight on Jet Airways, we arrive at the Mumbai airport.  Though there is an Indian guy from the hotel there to meet us, for some reason we can’t understand, he has no car.  He is waiting for someone to arrive with the car.  We stand outside and wait and wait.  The guy cannot speak English and cannot tell us why he doesn’t have a car!!  We only have this one day in Mumbai, and here we are standing outside at the taxi stand, waiting for a car that never arrives.  Finally, after about an hour of waiting like this, we tell the guy we must take a taxi to the hotel and get on with our day, but we insist he pay for it as we have already paid for a hotel pickup.

another paan maker in mumbai

We arrive at yet another stinky hotel with the tiniest and dirtiest room imaginable.  Luckily I don’t really have to sleep much here as I must wake at 2 a.m. to catch my flight home to Washington.  It’s a place to put our stuff basically.  And obviously, we will have to sleep once again in our sheet-bags.  I think Umer has failed us miserably on this more southern part of our trip.  Later we find out that he doesn’t usually book trips further south than Rajasthan, thus he booked us through another travel agency for Aurangabad and Mumbai.

the Gateway of India at Apollo Bunder

We head out as soon as possible toward the traveler’s center of Mumbai, the southernmost peninsula of Colaba, with most of the attractions.  We go directly to the Cafe Mondegar for lunch and beers.  We have an excellent lunch but I can’t remember what.  We have been so happy for the most part with all the food in India.  My passion for Indian food has only increased during this trip.  And after the food in Korea, believe me, it’s a welcome change.

horse-drawn gilded carriages which we can’t afford to take 😦

Mumbai, formerly known as Bombay, is the capital of the Indian state of Maharashtra and is an island connected by bridges to the mainland.  It’s the most populous city in India with 20.5 million people, and is also the 6th most populous in the world.  It is also the richest city in India and has the highest GDP of any city in South, West or Central Asia.  We honestly regret that we don’t have more days here and we much prefer Mumbai to Delhi.  It’s much cleaner and not so “in your face” with poverty, although we know it has the world’s largest slum.  Luckily, we bypass the “slum experience” here. We wish we had spent more time here and omitted Aurangabad entirely from our trip.

the carriages lined up around Apollo Bunder

After lunch we wander through the shopping streets with their bustling street stalls and markets.  We check out the multitudes of guys making paan.  Paan is an Indian tradition of chewing betel leaf with areca nut and slaked lime paste, and katha brown powder paste, with many regional and local variations. It is a betel leaf, chewed as a palate cleanser, a breath freshener, and for digestive purposes.  Paan makers may use tobacco in paan fillings. Most paan contains areca nuts as a filling. Other types include what is called sweet paan, where sugar, candied fruit and multicolored, sweetened, candy-like fennel seeds are used. In urban areas, chewing paan is generally considered a nuisance because some chewers spit the paan out in public areas.  The red stain generated by the combination of ingredients when chewed make an unsightly stain on the ground. This is becoming an unwanted eyesore in Indian cities such as Mumbai, although many see it as an integral part of Indian culture. In our travels throughout India we see the red stains everywhere and it is quite disgusting.  Even in White Tiger, the author describes entire rooms in buildings on which the entire bottom portions of walls are stained blood-red.

We take a walk to Sassoon Dock where we see the fishing boats and the Gateway of India, an arch of colonial triumph facing Mumbai Harbor from the tip of Apollo Bunder.  It was built to commemorate the royal visit of King George V in 1911, but was built in 1924.  Locals gather here, along with giant balloon sellers, and the usual touts and tourists.  Jayne has a funny experience with one of the balloon sellers.  She wants to buy a large balloon for her son and she goes around and around bargaining with the seller.  He finally agrees to her price, much lower than what he asks, and he gives her the deflated balloon in a package.  Later, when she opens it, she finds he has sold her a much smaller balloon that she intended to buy!  Ripped off!

jayne gets taken by the balloon seller

Along Apollo Bunder are multitudes of horse-drawn gilded carriages, known as Victorias.  We think of purchasing a ride around Colaba in one, but we are almost out of money and it is our last day here.  We sadly have to bypass the experience.

After walking about in the heat, we decide we must go into the Taj Mahal Palace, an exquisite hotel with a blend of Islamic and Renaissance styles.  It was built in 1903 by the Parsi industrialist JN Tata after he was refused entry to a European hotel because he was a “native.” We stop here and walk around the sumptuous lobby and then enjoy a glass of wine and a snack in the outrageously expensive Harbor Bar overlooking the Mumbai Harbor.

After our drinks, our driver Shyam takes us to the Chowpaty Seaface, a long promenade that fronts Back Bay looking out into the Arabian Sea.  We take a long stroll along the bay and watch the sunset.  There, across this sea, at a long invisible distance, is the country where I will spend the next year.  At this time I don’t know it, but later, after returning to the U.S. and applying for many jobs, I’m offered a job teaching at a university in Oman, directly across the Arabian Sea from Mumbai.

at Chowpaty Seaface with our driver Shyam

We head back to our hotel where I try unsuccessfully to get a little sleep until I must wake at 2 a.m. to catch a 2:30 a.m. taxi to Mumbai airport.  Here, I take a 5 a.m. flight for 3 1/2 hours to Doha, Qatar.  Then I take another flight from Qatar and arrive in Washington Dulles International Airport at 2:55 p.m.  My travels in Asia have come to an end, and though sometimes difficult, I can say without hesitation my last year in Asia was one of the grandest adventures in my life. 🙂 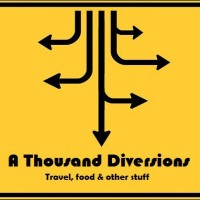 A German Expat's Life in Fredericksburg/Texas

inspired by the colours of the land, sea and sky of Cornwall

Let Me Bite That

Can I have a bite?

exploring New York City one adventure at a time

The World according to Dina

Notes on Seeing, Reading & Writing, Living & Loving in The North

Potato Point and beyond

A blog full of humorous and poignant observations.

The Eye of a Thieving Magpie

My view of this wonderful and crazy life - as I travel and explore.

From London to New York, living in an expat daze

Photography is a constant travel to new places

Never cease to explore and tell!

Insanity at its best!

Travels in the Middle East and beyond

"Wherever you go, go with all your heart " Confucius.

The Art and Craft of Blogging

Looking for meanings in words, images and sounds

Beth and Joe enjoy simple and active travel – every day of the year. They started their trip in 2012 and are still slowly traveling the world.

The Sophomore Slump
Footprints Around The Globe
TRAVEL WORDS

Adventures and Postcards from the road

Mostly photographs with some words by this arty scientist...

Roaming, at home and abroad

Come away with the raggle taggle gypsy-o

Adventures at home and abroad

the breezes at dawn have secrets to tell you... ~ Rumi